Restrictions are an instrument to protect human health and the environment from unacceptable risks posed by chemicals. Restrictions are normally used to limit or ban the manufacture, placing on the market (including imports) or use of a substance, but can impose any relevant condition, such as requiring technical measures or specific labels.
A restriction may apply to any substance on its own, in a mixture or in an article, including those that do not require registration, for example, substances manufactured or imported below one tonne per year or certain polymers.
On-site isolated intermediates, substances used in scientific research and development, and substances only posing risks to human health from their use in cosmetics are exempted from those substances to which REACH restriction applies.
Restriction Process 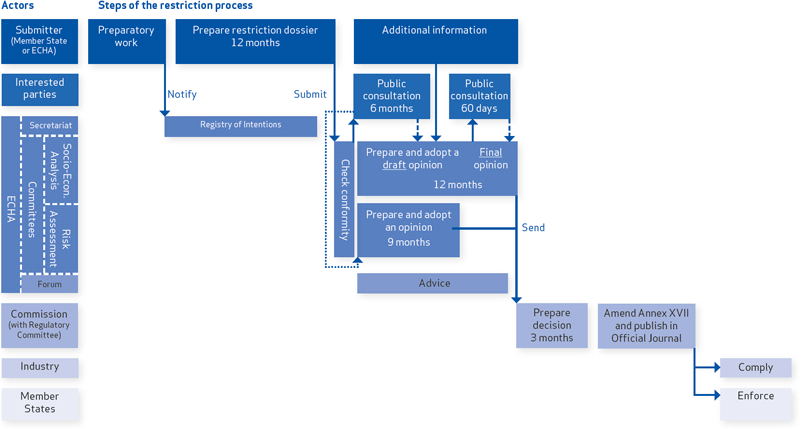 A Member State, or ECHA, at the request of the European Commission, can start the restriction procedure when they are concerned that a certain substance poses an unacceptable risk to human health or the environment. ECHA can also propose a restriction on articles containing substances that are on the Authorisation List (Annex XIV).

The intention to prepare a restriction proposal is made public in the registry of intentions before the proposal file itself is prepared so as to give an advance warning.
The dossier proposing the restriction contains background information such as the identity of the substance and justifications for the proposed restrictions. It includes the identified risks, any information on alternatives to the substance and the costs, as well as the environmental and human health benefits, resulting from the restriction.

The dossier needs to be prepared according to the REACH Regulation (Annex XV) and  has to be submitted to ECHA within 12 months of the intention to prepare the proposal was notified.

​Committees' opinions
​
Upon receiving the dossier ECHA's committees check whether the proposal conforms to the requirements of Annex XV. If it does, the dossier will be made publicly available for consultation (excluding any commercially confidential information). Interested parties can then comment on the restriction within six months of its publication on the ECHA website.

Within nine months of that same publication date, ECHA's Committee for Risk Assessment  (RAC) will give its opinion on whether the suggested restriction is appropriate in reducing the risk to human health or the environment based on the dossier and the comments received during the public consultation.

At the same time, the Committee for Socio-economic Analysis (SEAC) prepares an opinion about the socio-economic impacts of the suggested restrictions, taking into account the comments and socio-economic analyses submitted by interested parties. All comments on the SEAC draft opinion should be submitted within 60 days of its publication. SEAC will then adopt its final opinion, taking the comments into account, within 12 months of the start of the first public consultation on the restriction proposal.

Besides the two groups above the Forum of enforcement authorities from the Member States may provide advice to the committees on the enforceability of the proposed restriction.

The two opinions of ECHA's committees contribute to the decision of the European Commission, which will then take a balanced view of the identified risks and of the benefits and costs of the proposed restriction.
Within three months of receiving two committees' opinions, the Commission will provide a draft amendment to the list of restrictions in Annex XVII to REACH. The final decision is taken in a comitology procedure with scrutiny involving the Member States and the European Parliament.

​Once the restriction has been adopted, industry must comply. That means all including manufacturers, importers, distributors, downstream users and retailers.
The Member States are responsible for enforcing the restriction.
Steps
The adoption of a new restriction on the manufacturing, placing on the market or use of substances involves the following main steps:

A Member State, the European Commission or ECHA may have a concern that a certain substance poses a risk to human health or the environment. If so, it would undertake preparatory work to investigate the problem further.

2. Notify the intention to prepare a restriction dossier

If the Member State, the Commission or ECHA concludes that a restriction appears to be the best way forward, it has to notify its intention to prepare a restriction dossier. ECHA maintains a Registry of Intentions (RoI) which is publicly available on ECHA's website. It enables interested parties to prepare their contributions to the process.

The restriction dossier will include information on hazards and risks, available information on alternatives and a justification for restrictions at EU-wide level. The dossier needs to show that a restriction is the most appropriate risk management instrument to address the identified risks. The restriction dossier may also include an analysis of the socio-economic impacts. The proposal needs to be prepared according to the requirements given in Annex XV to REACH. The dossier needs to be submitted within 12 months of the notification in the Registry of Intentions.

Member States can submit their Annex XV restriction dossiers according to Article 69(4) through the same web form used to notify the intention.

The Committees check whether the submitted restriction dossier conforms with the requirements of Annex XV to REACH.

6. Public consultation on the restriction report

Conforming restriction reports will be published on ECHA's website, excluding any confidential information. Interested parties may submit comments on the restriction report and supporting documents within six months of the date of their publication.

7. Advice from the Forum

The Forum may provide advice to RAC and SEAC on the enforceability of the proposed restriction.

8. Prepare and adopt the opinion of RAC

9. Prepare and agree on the draft opinion of SEAC

11. Prepare and adopt the opinion of SEAC

SEAC prepares and adopts the final opinion taking into account the comments on its draft opinion.

12. Send the opinions to the Commission

ECHA sends the opinions of RAC and SEAC along with relevant background documents to the European Commission. These are also published on ECHA's website.

13. Prepare and adopt the restriction decision

Within three months of receiving the committees' opinion, the Commission prepares a draft amendment of the list of restrictions.
If the Council or the European Parliament do not oppose to the restriction, the Commission adopts it. The decision to restrict is published in the Official Journal as an amendment Annex XVII of the REACH.

Once the substance restriction has been adopted industry needs to comply with it. Industry refers to anyone addressed in the restriction, such as manufacturers, importers, distributors, downstream users or retailers.

The Member States are responsible for enforcing the restriction.